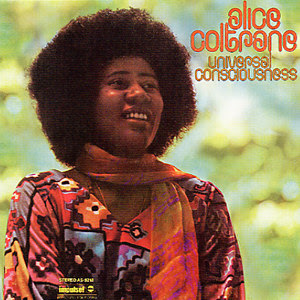 Alice Coltrane - Universal Consciousness (1971)
jazz | 1cd | eac-flac-cue-log-cover | 270MB
Verve / Impulse! 24-bit remaster 2002
Allmusic:
Recorded between April and June of 1971, Alice Coltrane's Universal Consciousness stands as her classic work. As a testament to the articulation of her spiritual principles, Universal Consciousness stands even above World Galaxy as a recording where the medium of music, both composed and improvised, perfectly united the realms of body (in performance), speech (in the utterance of individual instrumentalists and group interplay), and mind (absolute focus) for the listener to take into her or his own experience. While many regard Universal Consciousness as a "jazz" album, it transcends even free jazz by its reliance on deeply thematic harmonic material and the closely controlled sonic dynamics in its richly hued chromatic palette. The set opens with the title track, where strings engage large washes of Coltrane's harp as Jack DeJohnette's drums careen in a spirit dance around the outer edge of the maelstrom. On first listen, the string section and the harp are in counter-dictum, moving against each other in a modal cascade of sounds, but this soon proves erroneous as Coltrane's harp actually embellishes the timbral glissandos pouring forth. Likewise, Jimmy Garrison's bass seeks to ground the proceedings to DeJohnette's singing rhythms, and finally Coltrane moves the entire engagement to another dimension with her organ. Leroy Jenkins' violin and Garrison's bottom two strings entwine one another in Ornette Coleman's transcription as Coltrane and the other strings offer a middling bridge for exploration. It's breathtaking. On "Battle at Armageddon," the violence depicted is internal; contrapuntal rhythmic impulses whirl around each other as Coltrane's organ and harp go head to head with Rashied Ali's drums. "Oh Allah" rounds out side one with a gorgeously droning, awe-inspiring modal approach to whole-tone music that enfolds itself into the lines of organic polyphony as the strings color each present theme intervalically. DeJohnette's brushwork lisps the edges and Garrison's bass underscores each chord and key change in Coltrane's constant flow of thought.
On side two, "Hare Krishna" is a chant-like piece that is birthed from minor-key ascendancy with a loping string figure transcribed by Coleman from Coltrane's composition on the organ. She lays deep in the cut, offering large shimmering chords that twirl -- eventually -- around high-register ostinatos and pedal work. It's easily the most beautiful and accessible track in the set, in that it sings with a devotion that has at its base the full complement of Coltrane's compositional palette. "Sita Ram" is a piece that echoes "Hare Krishna" in that it employs Garrison and drummer Clifford Jarvis, but replaces the strings with a tamboura player. Everything here moves very slowly, harp and organ drift into and out of one another like breath, and the rhythm section -- informed by the tamboura's drone -- lilts on Coltrane's every line. As the single-fingered lines engage the rhythm section more fully toward the end of the tune, it feels like a soloist improvising over a chanting choir. Finally, the album ends with another duet between Ali and Coltrane. Ali uses wind chimes as well as his trap kit, and what transpires between the two is an organically erected modal architecture, where texture and timbre offer the faces of varying intervals: Dynamic, improvisational logic and tonal exploration become elemental figures in an intimate yet universal conversation that has the search itself and the uncertain nature of arrival, either musically or spiritually, at its root. This ambiguity is the only way a recording like this could possibly end, with spiritual questioning and yearning in such a musically sophisticated and unpretentious way. The answers to those questions can perhaps be found in the heart of the music itself, but more than likely they can, just as they are articulated here, only be found in the recesses of the human heart. This is art of the highest order, conceived by a brilliant mind, poetically presented in exquisite collaboration by divinely inspired musicians and humbly offered as a gift to listeners. It is a true masterpiece. The CD reissue by Universal comes with a handsome Japanese-style five-by-five-inch paper sleeve with liner notes reprinted inside and devastatingly gorgeous 24-bit remastering.

None of the download links on this blog are hosted on my own servers.
Anything posted on here is for promotional and review purposes only and all the albums downloaded from here should be deleted within 24 hours.
If you like the albums you downloaded here please support the artist by buying the original cd.